Showing posts from February, 2009
Show all

- February 19, 2009
Journalists are important partners for heritage activists. Journalists and their media play an important role in setting an agenda in local and national issues. Lately, the Trowulan case appeared to the surface -more or less- was also part of the media's work. When I was in Medan, I had relatively friendly relationships with some journalists. Some of them were genuine in their interest and support for heritage conservation. They wrote issues based on facts and interviews, did their best to do their part in our efforts to save the city's identity. Some of them looked merely for publicity without bothering reading press releases or backed-up information. The result was poor articles with inadequate judgements. I felt sorry and pity for the last type of journalists. But I guess in any professions there is always someone who doesn't try good enough to be professional. Since I moved to Holland, I learned to know a journalist of Warta Kota, DM, who then studied in University of
Post a Comment
Read more

Club of Amsterdam Journal on their February edition presented an interesting topic for me : creative economy. The latest research about this topic was conducted by no less than five UN bodies : UNCTAD, UNDP UNESCO, WIPO and the International Trade Centre (ITC). It must be very important. The Club itself is an independent, international think-tank that organizes regular high-level discussions on preferred futures. Definitions of the "creative economy" may vary, but it is generally agreed that at the heart of the creative economy lie the creative industries. There is no single agreed definition of the "creative economy" or the "creative industries" although clearly, they embrace the concept of "creativity" as an essential characteristic. The following groups of industries are included: cultural heritage; visual and performing arts; audiovisual industries; publishing and printed media; new media; design; and creative services, including advertisin
Post a Comment
Read more

PRESERVATION OF THE IT HISTORY 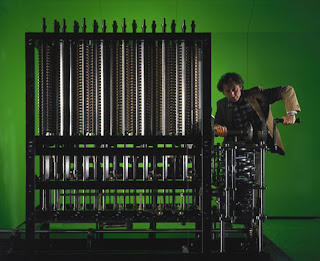 I have learned about preservation efforts of the information technology yesterday during a conference "Nu voor Later!" (Now for Later!) in the Reinwardt Academy, Amsterdam, organized by Erfgoed Nederland. I have listened to a presentation about the Swedish IT-history: a Cooperation between Museum, University and Society by Peter Du Rietz, National Museum of Science and Technology (Tekniska museet) from Sweden. The project is in many ways unique and to a large extent focusing on the use of computers in different sectors of society in the last 60 years. And the second presentation was delivered by Doron D Swade, an engineer, historian, a museum professional, and a leading authority on the life and work of computer pioneer Charles Babbage. Swade masterminded the construction of the first Babbage calculating engine built to original 19th-centurydesigns and, in 1989, founded the Computer Conservation Society, a Specialist Group of the British Computer Society. The Society is de
Post a Comment
Read more

When I arrived in Holland in 2005 I looked for local heritage organizations. I found many but I have chosen to be a member of an organization where I live, De Vereniging Vrienden van de Amsterdamse Binnenstad or Foundation of Friends of Amsterdam City Centre. It is a non-profit organization which was established in 1975 and run by volunteers. Sounds familiar to me. My obligation is only paying an annual fee which is affordable, euro 20, it is minimum and extra amount is always welcome, and I get newsletters regularly. After few years become a member, I noticed how much the organization has done and to consider that it is run by volunteers, the achievements and methods of work are worth learning for me. They have regular programs for members (about 2400 of them), acting as a watchdog for municipality's policies and many more actions as far as I could observe from their newsletters. Lately they supported the application of Amsterdam Municipality to UNESCO as a world heritage city. I
Post a Comment
Read more

Last Sunday I went to a special cinema, Het Ketel Huis in a complex called Westergasfabriek in Amsterdam West. For a long time I paid attention to this industrial heritage because of its project scale which took a long process and periods to accomplish it. It happened I listened to the story of the project leader last year who told stories how complicated the whole process was but they made it at the end. The Westergasfabriek was constructed in 1883 by the British Imperial Continental Gas Association. At the time it was the largest gas works in Amsterdam. During the first decades the gas was used principally for public lighting. Most of the Westergasfabriek buildings were designed by Isaac Gosschalk, in a variation on the 'Dutch Renaissance' style. The Gashouder was designed by engineer Klönne. After the discovery of natural gas in the 1960's at Slochteren, in the north of the country, gas production was terminated. Part of the buildings were demolished, amongst which t
Post a Comment
Read more
More posts