Showing posts from February, 2022
Show all

MINDFULLNESS EXERCISE FOR THE YOUNG ARCHITECTS 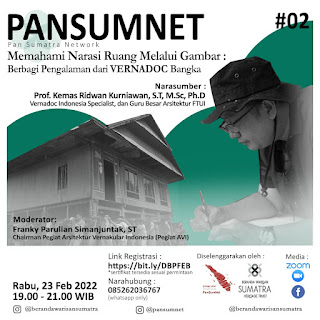 Always happy to get in touch with friends and colleagues from the field during the webinar of Pansumnet about manual documentation of vernacular architecture in  Muntok, South Bangka, Sumatra by Vernadoc Indonesia.   Vernadoc tries to document vernacular architecture manually. A skill that is fading away for the younger generation. It takes time of putting all information on paper with a pencil and pen. As the speaker, Prof. Dr, Kemas Ridwan Kurniawan, said, it is a slow process of understanding and loving the vernacular architecture. You wouldn't do it if you are in rush.  A kind of mindfulness exercise especially for the young architects.
Post a Comment
Read more

- February 18, 2022
February 17, 2022, the Prime Minister of the Netherlands has apologized to Indonesia for what the Netherlands has done during the period of 1945-1949. A deep excuse, he said. This is the third time that the representatives of the Netherlands apologize to Indonesia. In 2005, the Ministry of Foreign Affairs was the first, and in 2020 the King of the Netherlands was the second. The third apology followed the launching of the results of the multiyear research on Independence, Decolonization, Violence and War in Indonesia 1945-1950.  The launching began early in the morning through a live stream in two languages (Dutch and English). There are many results of this research in publications and audio-visual documentation. This factsheet shows a comprehensive but compact overview.      What do the Indonesians think about the research? If the Director-General of Culture, Hilmar Farid,  as a representative of the Indonesian Government might be considered to represent Indonesia, it is worth read
Post a Comment
Read more 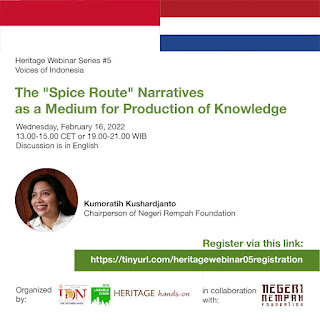 Heritage Webinar Series #5 Voices of Indonesia Wednesday, February 16, 2022 13.00-15.00 CET or 19.00-21.00 WIB Discussion is in English The "Spice Route" Narratives as a Medium for Production of Knowledge Speaker Kumoratih Kushardjanto Chairperson of Negeri Rempah Foundation Registration via this link: https://tinyurl.com/heritagewebinar05registration Organized by: Heritage hands-on , Indonesian Diaspora Network the Netherlands (IDN-NL), and IDN Liveable Cities (IDN-LC). Contact Hasti Tarekat heritage@idn-lc.nl Spices became a reason for European trading vessels to come to the Indonesian archipelago. It was the history of survival, competition, violence, and repression. Fast forward to the 21st century. How do the Indonesians interpret this history and what do they want to do with it? Negeri Rempah (Spices Land) Foundation is one of the leading players in promoting narratives of spices history amongst the Indonesians, especially the young generation.
Post a Comment
Read more
More posts