An exemplary public-private partnership in heritage conservation of Indonesia. Two plantation museums in 5 years period is a relatively huge achievement for the industrial heritage of Indonesia. This is only possible with the ideal combination of financial support of the plantation state company, in this case, PTPN II, museum professional executive the board led by Sri Hartini, and active involvement of community organizations like Sumatra Heritage Trust.

Soedjai Kartasasmita, the leading figure of plantation industry of Indonesia has taken an initiative to establish a museum to convey history of plantation of the country to the young generation. He was and is still supported by the energetic museum director, Sri Hartini, to fulfill the dream.

The museum was formally opened on 10 December 2016 at a complex of historical buildings in Medan, North Sumatra (built-in 1917). The buildings belong to the AVROS, the Dutch abbreviation for the Association of Rubber Planters in the East Coast of Sumatra. This Association was established by plantation investors such as Horisson and Crosfield and Goodyear Rubber Company. In the end, this was not only an association for the rubber planters, but also oil palm, tobacco, and other commodities planters.

In 2021, Musperin is busy preparing the second museum at Badan Kerja Sama Perusahaan Perkebunan Sumatera (BKS-PPS) Building, also in Medan. This institution is the continuation of AVROS. Now, this association consists of 162 plantation companies in Sumatra from all sorts of backgrounds (domestic, international, government, private sector).

The BKS-PPS Building has a strategic location at the corner of the business and historical district Kesawan. The green dome with its clock at the highest point is in the renovation process so the general public would be able to climb to this point and the floor will function as a working space as well. Those who will enjoy the busy city center could sit at a café at the same level as the museum display.

A special element from this second museum, on the third floor there is a room that used to be called the Dactyloscopy Bureau (dactyloscopy is a method of using fingerprints for identification). Here hundred thousand fingerprints of plantation workers from Java and China are well kept.  These fingerprints are witnesses of the heyday of the plantation industry not only on the East Coast of Sumatra but also in the Dutch Indies and Indonesia. It is worth consideration to registering these important fingerprints in the list of Memory of the World. For that purpose, Musperin has a digitalization program to record all the fingerprints.

Coffee came to the Dutch Indies in 1646 and in 1712 the first export to Amsterdam. In 1900 the new coffee variety Robusta from Congo was introduced and now the most common commodity from Indonesia.

Oil Palm was in the early 19th century only planted along with street shadow plants. In 1902 an oil palm processing machine was discovered in East Sumatra. In 1911 an oil palm plantation was opened by the French-Belgium company SOCFIN (Société Financiére des Caoutchoucs). In 1918 England opened an oil palm plantation in Malaya with Deli Dura seeds from Buitenzorg (the current Bogor).

Tea was produced in Malabar and Tanara, West Java, by Karel Albert Rudolf Bosscha, in 1686. The first tea factory outside Java was in Simangulun, North Sumatra, opened in 1910. Now the famous tea from Sumatra is Kayu Aro Tea from Jambi.

Cacao was already planted in Indonesia since 1560 but widely exploited in Central Java around 1880.

Tobacco was exploited in Sumatra by Jacobus Nienhuys and in 1869 Deli Maatschappij (Deli Enterprise) was established following the economic booming of tobacco exports from the East Coast of Sumatra. After the Independence, Soekarno represented Indonesia and Conrad Adenhaver represented Germany, opened the tobacco auction center in Bremen, Germany, called Tabak Bõrse. Deli Sumatra Tobacco was famous in the world due to this place.

Other types of tobacco were from Jember, East Java, called Besuki Na Oogst (BNO), and from Klaten. Both are called Javanese Tobacco, and from Deli called Sumatran Tobacco. 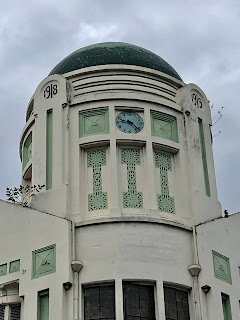 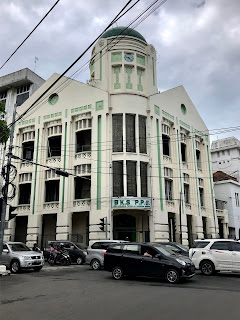 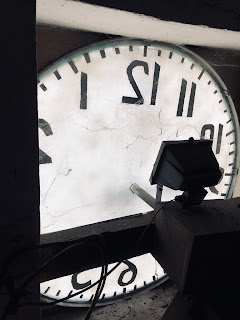 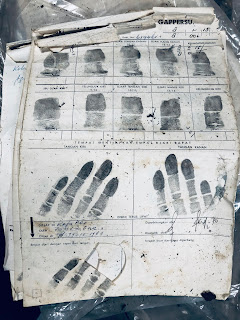 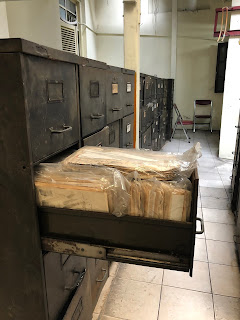 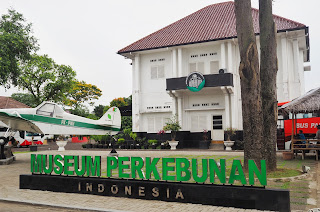 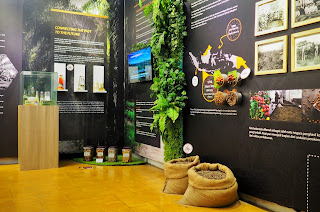 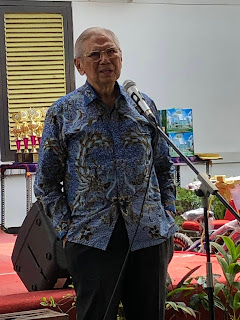 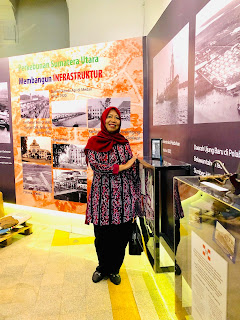 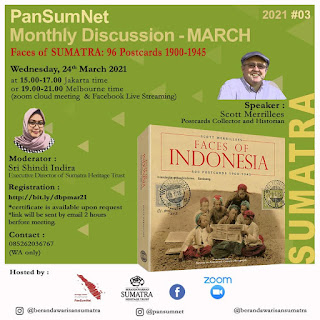 There is a saying that a picture speaks a thousand words and a postcard sends a thousand messages. Scott Merrillees, author of a published book ‘FACES OF SUMATRA: 500 Postcards 1900-1945’ in 2019. The book highlights the diversity of the people of Indonesia before independence was declared on 17 August 1945. There are 500 postcards presented in six chapters—Sumatra, Java, Bali, and Lombok, Kalimantan, Sulawesi, and Eastern Indonesia.

This time Scott will talk about the 96 postcards in Chapter One: SUMATRA. 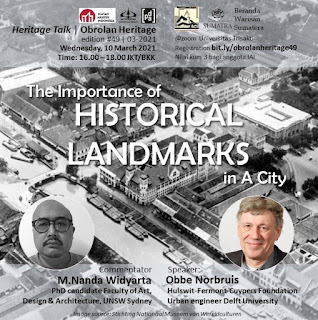 Several years ago I was at NAi (the old name of the New Institute, Rotterdam) for a meeting. When I  was walking to the exit door passing by the library, all of sudden, I saw a picture of a palm tree on a desk library. My tropical DNA instinctively rang and I shouted, "Palm tree!" The man who was using the reference book looked up and smiled.

That man was Obbe Norbruis who becomes a good friend of mine. When he was in the library, he tried to collect information about the architecture bureau Hulswit-Fermont-Cuypers in the Dutch Indies. He wrote two books about the subject in Dutch and now they are also available in English.

The launching of the English version is tomorrow, 8 March 2021.

I am lucky to bump into a friend like Obbe. He is diligent and perseverant in following his passions to write something that he thinks will be useful for the shared heritage of Indonesia and the Netherlands.

Besides a good writer, he is also a good speaker. I listened to his presentations and every time I never got bored to learn new things.

Good luck Obbe, thanks for your friendship and keep sharing. 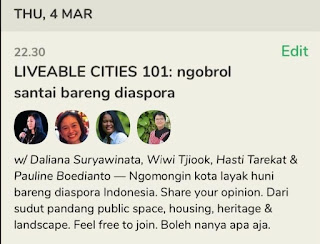 What we are lucky to live in an era when new ways of communication are discovered continuously. The latest discovery is Clubhouse, a platform to exchange thoughts or simply to chat. Personal or professional. The four ladies from Indonesia Diaspora Netherlands, Task Force Liveable Cities keep up with this new trend. On Thursday, 4 March, we are going to talk to the audience in Indonesia about public space, housing, heritage, and landscape, in an informal way.

If this medium is useful to spread positivism, I am in.