Le Corbusier's Ghetto (and how the Dutch deal with it)

Last night I took a part in an online discussion for television and live stream programs with the representatives of the Municipality of Amsterdam and the Housing Corporation Rochdale about living in Amsterdam Southeast. It was organized by the New Metropolis Zuidoost, a branch of Pakhuis de Zwijger, a think tank for urban and sustainability issues.

I had to be bold in five minutes that I had during the broadcasting. So what I said is that Amsterdam Southeast was built based on the ideals of Le Corbusier, the Swiss architect, that everyone no matter from which background has the right to light, air, and space. He dreamed of urban development that separated work, living, recreation, and various modes of mobility. This ideal was applied in Amsterdam Zuidoost in the 1960s to be the largest experiment ever in the world in terms of scale and innovations. The experiment was lead by Cornelis van Eesteren, the pioneer of modern architecture in the Netherlands.

The reality showed that some parts of the ideal of Le Corbusier turned to create the first and largest ghetto of the Netherlands between the 1970s and 1990s due to various reasons.

From the 1990s until the present day, the local government has been working hard to fix the mistakes of the experiment through renewal programs physically, socially, and economically.

I have witnessed 15 years of the renewal programs as a resident of Amsterdam Southeast. As someone with an academic background in social welfare and regional planning, the whole process becomes an exciting and dynamic living lab for me. Nothing is perfect but I have to admit that to some extent the local stakeholders have managed to fix a lot of mistakes. Amsterdam Southeast has regained its confidence as a former charming Le Corbusier's ghetto that offers interesting adventures for the new middle class.

I am lucky to live in the part where the ideals of Le Corbusier are still intact. Plenty of green, open space, car-free area, in short abundant of light, air, and space. A true luxury for Amsterdam's standard of living.

That is exactly the point that I have said last night. To keep the ideals of light, air, and space for everyone in the next masterplans of Amsterdam Southeast that is in the making for the next 20 years. 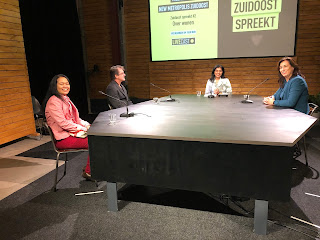